185 VR 16 PIRELLI CINTURATO ™ CA67, which is still the tyre that Longstone Classic tyres recommend for the Mistral today. There was a period when these tyres were not available, at which point the Maserati Club did some research into finding the best alternative tyre for these cars. They came back with the 600WR16 Michelin Pilote X as the best alternative to the PIRELLI CINTURATO ™ CA67.

The 205VR15 PIRELLI CINTURATO ™ CN72 HS was fitted as original equipment to the Maserati Mistral. This is still the best tyre for the later Mistral. However some people like to fit more modern tyre technology in the form of the 215/70VR15 Michelin XWX. This is an excellent tyre, though as it is a little smaller in diameter this affects the gearing and look of the car. PIRELLI have also now reproduced their 215/70 WR 15 PIRELLI CINTURATO ™ CN12 which was very much a top tyre of the period coming out in 1971.

Other Options for Maserati Mistral

The classic Maserati Mistral, named after a cold northerly wind of southern France, was the successor to the iconic 3500 GT, it was also the first in a series of classic Maseratis to be given the name of a wind. It was offered both in Coupe and Spider form. 830 classic Maserati coupes and 120 classic Spyders were built in total.

The Mistral is the last model from the 'Casa del Tridente' or 'House of the Trident' to have the famous straight six cylinder, twin-spark, double overhead cam engine, as fitted to the classic racer Maserati 250F Grand Prix cars that won 8 Grand Prix between 1954 and 1960 and one F1 World Championship in 1957 driven by the famous Fangio. The engine also featured hemispherical combustion chambers and was fed by a Lucas fuel injection system which was a novelty at the time for Italian car manufacturers. Although the Lucas fuel injection system enhances performance and added 15hp, quite a few owners, especially in the United States have converted their cars to Weber carburetors due to difficulties in tuning the system properly. Maserati subsequently moved on to the bigger V8 engines for their later production cars.

The picture below shows the 205VR15 CN72 CINTURATO ™ HS tyre that PIRELLI put into production in 1964, which was original equipment for the Maserati Mistral. On either side of this tyre are more modern 70% profile tyre sizes that are often fitted by mistake. On the left is a 205/70VR15, which is far too small in diameter, and on the right is a 215/70VR15 which is closer in dimensions and would also be a good tyre for the Maserati Mistral. Some cars that fitted the 205VR15 CINTURATO ™ changed to the 215/70VR15 tyre when the low profile tyre was developed at the beginning of the 1970's 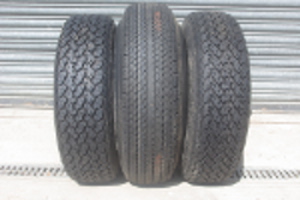 There were three engine variants fitted to the Mistral; 3500, 3700 and 4,000 cc. The most sought after derivative is the 4000 cc model. Only the earliest of the classic Maserati Mistrals were equipped with the 3500 cc engine. Unusually, the body was offered in both aluminium and steel but no one is quite sure as to how many of each were built. Use of the aluminium body panels had no effect on the performance of the Mistral. The mixture of the aluminium body on a steel substructure can lead to corrosion (almost all Italian cars have this feature) due to the dissimilar metals. The classic Maserati Mistral came as standard with a five speed gear box from ZF and also had four wheel disc brakes. As was Maserati's practice at the time the front suspension was independent while the rear used a solid axle. The Mistral had a top speed of around 140 mph to 145 mph.

If you require new Borrani wire wheels for your classic Maserati Mistral then please click here.

Cannot find what you are looking for? Any questions?